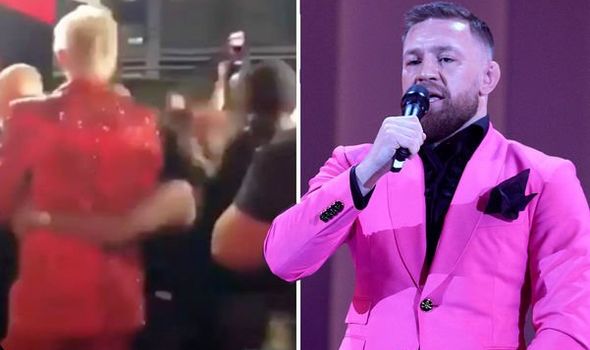 Machine Gun Kelly’s girlfriend Megan Fox was filmed being pulled away from the incident, as security stepped in to break the pair up. Further pictures show 33-year-old Conor and the singer, 31, being held back from each other respectively.

At first, it was reported that their alleged feud began after the Bloody Valentine star refused to have a picture with Conor, however the latter’s representatives shut the claim down.

His rep told TMZ: “Conor McGregor did not ask anyone for a picture, nor did he instigate this incident.

“He does not know Machine Gun Kelly, outside of the fact that he attended Conor’s fight this past July.”

Conor echoed this response and said of the altercation: “Absolutely nothing happened. I don’t know.

“He showed up, and I don’t know. I don’t know the guy,” the UFC champ told Entertainment Tonight.

“Nothing happened with me, I only fight real fighters, people that actually fight, you know what I mean.”