Thrilled to have a few days off after a grueling but exhilarating clay-court season, Conchita Martínez, the former world No. 2 from Spain, was happy to be back home in Esplugues de Llobregat, a municipality just outside Barcelona, for a few days between Roland Garros and Wimbledon.

She had just sent her coaching pupil, the world No. 3 Karolina Pliskova, off to compete at a WTA tournament in Birmingham, England, after weaning her off clay. Pliskova won the Italian Open on clay but was upset in the third round at Roland Garros; she needed to become reacquainted with grass.

Via FaceTime, Martínez, 47, showed off her 500-bottle wine cellar (her favorites include French Bordeaux, Spanish Priorat, wines from Tuscany and from Napa in California), and her trophy case. Displayed prominently is the Wimbledon Plate she won 25 years ago when she ousted the nine-time champion Martina Navratilova to capture her only Grand Slam title and become the first Spanish woman to win Wimbledon.

The following conversation has been edited and condensed.

You’ve been back to Wimbledon many times since 1994. Do you ever walk around and just reminisce?

It will always be a special place for me. The best day is the Sunday before. That’s when I sometimes walk alone and remember. There is nobody there yet, and the courts, the grass, is so green because they haven’t been used yet. And the flowers. Everything is just perfect.

Even though you were the third seed and had reached the semifinals the year before, not many people gave you a chance against Navratilova, a great grass-court player.

I thought, if I’m going to win one, it’s going to be Roland Garros. But after I reached the semis the year before, I started to become a little more friendly to the grass instead of saying, “Grass is for cows.” 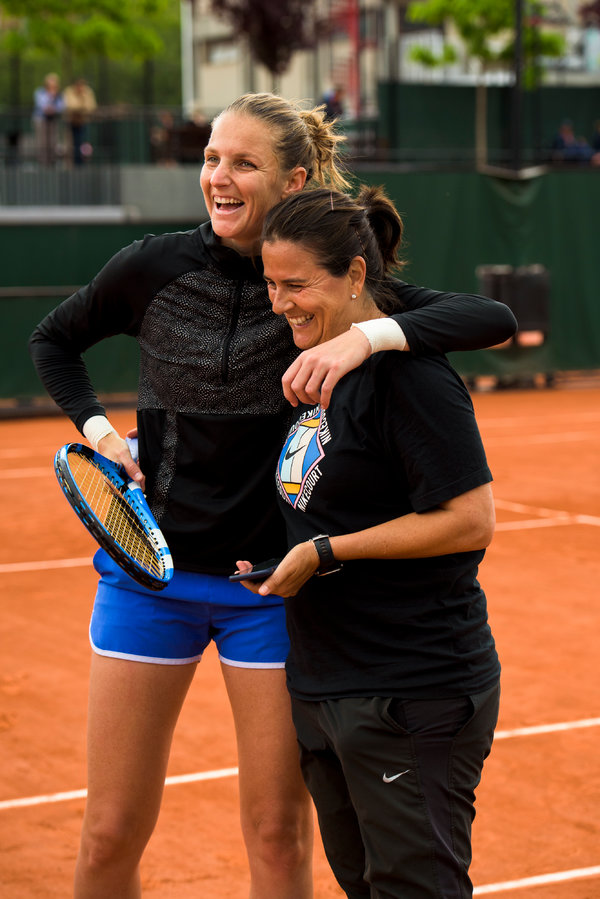 Grass is a very hard surface; one day you can play great on it, and another day someone surprises you. You have to accept that you might get bad bounces and you’re not going to play a perfect match. Or it rains and the court gets very, very fast.

But it didn’t rain after the second day that year, and the conditions were perfect for me because the court was very dry.

The top seed, Steffi Graf, was upset in the first round that year. Did that change the whole feeling of the tournament for everyone else?

I remember that day exactly. It was raining on and off. I was in the city with friends instead of at my rented home near the club. We were watching on TV. But it was too early to say, “Oh, she lost, so it’s a chance for me.” Seven matches in 14 days in a Grand Slam is a lot. But when you lose the most favored to win the tournament, yeah, you all think about it.

You beat Lindsay Davenport in the quarterfinals and then Lori McNeil 10-8 in the third set to reach the final. How bad were your nerves?

At the end, you can’t think of nerves; you just have to play. She was serving and volleying really well. I had to pass her off the backhand, sometimes with the slice and sometimes with topspin. I guess it worked. And against Martina, I had just beaten her in Rome [en route to the title] so that gave me confidence. I just said, “Why not on grass?” I guess I had the right attitude, no?

You came up in a golden age of women’s tennis, with Navratilova and Chris Evert, Graf, Monica Seles, Jennifer Capriati, Davenport, Martina Hingis and Arantxa Sánchez Vicario. Now that you see the game as a coach, is this a golden era, too?

There are a lot of players now, so this is a wonderful story. But now players hit with a lot of power from everywhere and not as much variety and thought. [Ashleigh] Barty winning the French was special because she has slice, topspin, she comes to the net, she hits drop shots. So, this is more like my era, no?

You’re one of only a few successful women coaches. Why?

This question has been coming my way for years. We’re starting to see a few more, and hopefully people can see what we bring to the table. The more successful the players are, the more they will talk highly about us, and maybe more players are going to hire women coaches.

Giant 9ft python on the loose in Cambridge