Home » Britney Spears Has Something To Say To Her Critics Britney Spears Has Something To Say To Her Critics

Britney Spears is in the news again, but not for her conservatorship — the pop star shared a topless photo on Instagram. While many of her fans and celebrities, including Paris Hilton, liked the snap and commented supporting the #FreeBritney movement, others thought that the person in the picture was not her.

The snap, which showed Spears standing with her back facing the camera, had something missing. Fans noticed that Spears’ neck tattoo was not present in the picture. The missing neck tattoo was surprising because back in June, the singer had shared a picture where she showed off the tan and her tattoo while wearing pink. Her followers were quick to voice their concerns and opinions. “Yall know this ain’t Britney right??” wrote a follower. “Girl I love you but we see you in a bikini every other day this ain’t your waist,” wrote another.

The list of speculations grew long. This was not the first time when people thought that Spears shared fake pictures. In June, fans raised concerns about Spears’ Maui beach post being fake. Amid growing concerns and surrounded by surfaced theories, Spears has decided to come out and respond to her critics who think that her Instagram post was fake. Here’s how she responded.

Britney Spears tells her critics exactly where to go 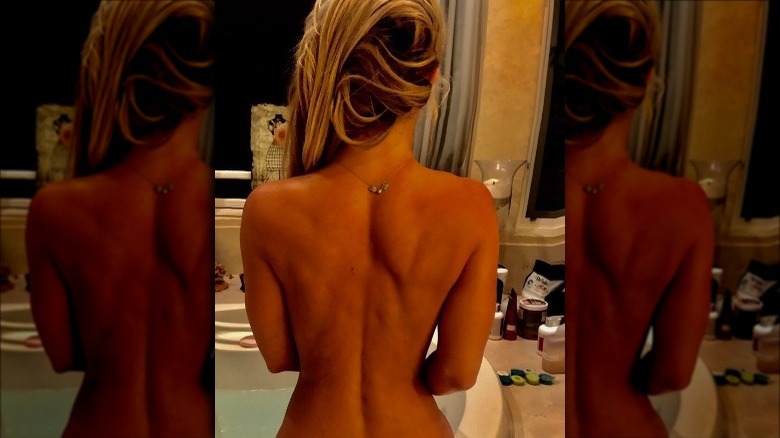 Responding to the allegations, the “Circus” singer posted a meme on her Instagram. Britney Spears wrote that the tattoo on her back was missing because she edited it out. In the caption, Spears wrote, “Ok so … I edited out my tattoo on my neck cause I wanted to see what it would look like clean … ” The meme itself said: “while you’re talking behind my back feel free to bend down and KISS MY A**.” Spears added that she liked it that way. “yeah I like it better so while you guys are talking behind my back go ahead and kiss my a** haters !!!!!!” the singer added.

While Spears may have thought that her response would close the case of the missing Britney Spears tattoo, her critics were soon to catch up. “But a few weeks ago you said it was your favorite tattoo that we never get to see? Ummmm,” commended a follower. Others claimed the person using the account wasn’t Spears at all.

Spears’ harsh response to her critics may come as a surprise to some fans. Many of her critics appear to come from a place of concern, where they fear that her account is managed by someone else. Several people commented “This isn’t Britney” on the post. Many of them are also supporters of the #FreeBritney movement, which has only grown stronger as she tussles with her father Jamie Spears over her conservatorship status.

The Daily Stream: 'Starstruck' is 'Notting Hill' for the 'Broad City' Crowd – And It's Wonderful