Brendan Fraser tears up during standing ovation for comeback movie The Whale at Venice Film Festival: Actor shunned the limelight after depression and sexual assault claim

Brendan Fraser teared up as he received a standing ovation at the Venice Film Festival for his latest movie The Whale.

The actor, who has been out of the spotlight with depression amid claims he was sexually assaulted, bowed as he was greeted with a huge round of applause.

The 53-year-old smiled and batted back tears as he welled up to the emotional response during the festival last night.

Friends and fans – including fellow thespian Dwayne Johnson – hailed his return, with The Rock saying he was ‘rooting for all your success brother’.

The movie marks the legendary star’s comeback after grappling with depression following a claim of sexual assault and being in and out of hospital for health issues. 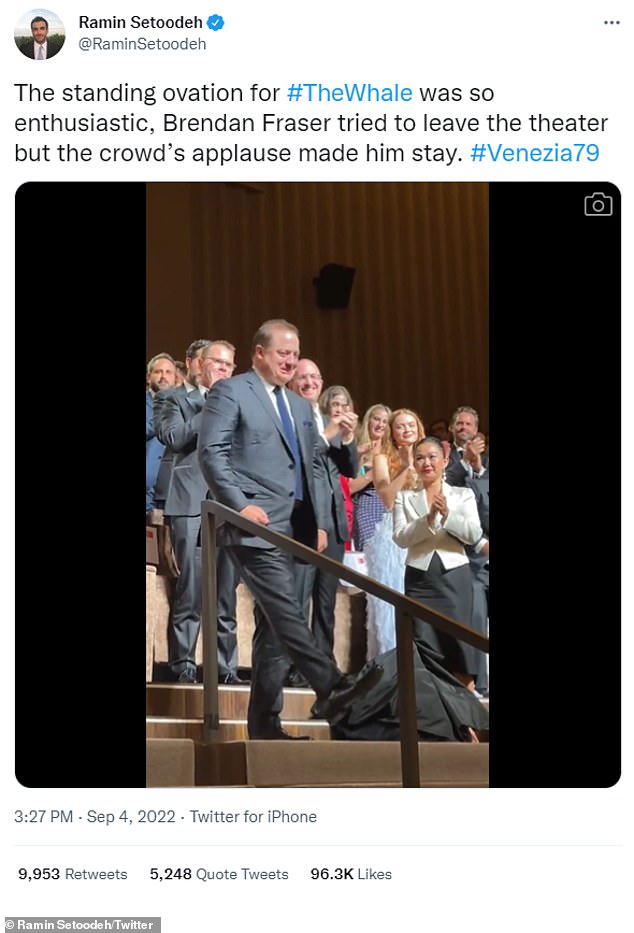 Emotional: Brendan Fraser got emotional while receiving a lengthy standing ovation at the Venice Film Festival for his latest film The Whale, which is already garnering him Oscars buzz 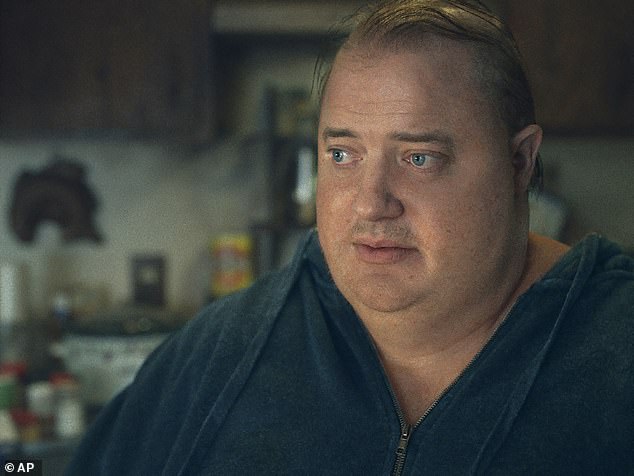 Well-received: The Whale is a psychological drama which saw Brendan undergo a physical transformation, as well as wear prosthetics to play a man ‘living with obesity’ (still from the film) 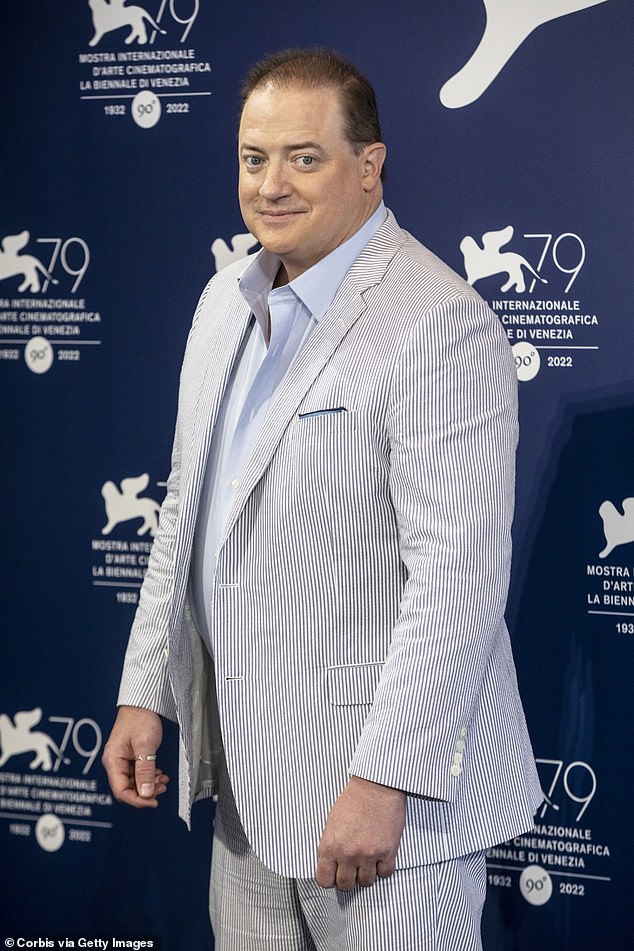 Dapper: Fraser looked delighted on Sunday as he attended the photocall for his The Whale at the festival on Sunday

In footage shared on social media, Fraser was seen getting emotional during the lengthy six-minute standing ovation for the film.

He is at first pictured sitting down, before director Darren Aronofsky, 53, motions for him to stand up, at which point the crowd roars with applause.

The Mummy leading man looked dapper in a dark grey suit, which he paired with a vivid blue tie and black dress shoes.

‘Man this makes me so happy to see this beautiful ovation for Brendan. He supported me coming into his Mummy Returns franchise for my first ever role, which kicked off my Hollywood career.

‘Rooting for all your success brother and congrats to my bud Darren Aronofsky.’

Another Twitter user wrote, ‘Brenden Fraser being brought to tears anytime he gets praise or recognition destroys me. You are so loved!!’

Someone else hinted at the Oscars buzz surrounding the role, writing, ‘I generally don’t care about award shows, But Brendan Fraser better win that Oscar.’

Meanwhile yet another fan cheered on Fraser’s comeback: ‘If you know anything about Brendan Fraser’s personal life and what happened to his career, then you should be cheering for this man. What a beautiful moment that’s well deserved. The beginning of something special.’ 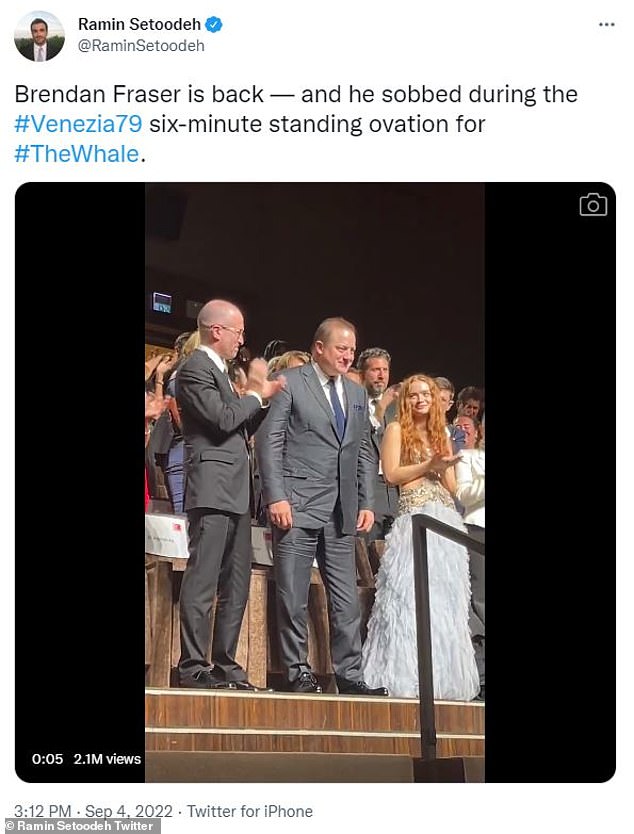 Recognition: The actor, 53, got teary-eyed when he heard the enthusiastic response from the audience and though he tried to leave the theater the continued applause made him linger

Delighted fans: Another Twitter user wrote, ‘Brenden Fraser being brought to tears anytime he gets praise or recognition destroys me. You are so loved!!’

Oscars buzz: Someone else hinted at the Oscars buzz surrounding the role, writing, ‘I generally don’t care about award shows, But Brendan Fraser better win that Oscar’

Comeback: Meanwhile yet another fan cheered on Fraser’s comeback, writing ‘If you know anything about Brendan Fraser’s personal life and what happened to his career, then you should be cheering for this man’

The Whale is a psychological drama which saw Brendan undergo a physical transformation, as he plays a 600-pound gay man confined to a wheelchair, a role for which he also had to wear prosthetics.

Its official synopsis reads: ‘A reclusive English teacher suffering from severe obesity attempts to reconnect with his estranged teenage daughter for one last chance at redemption.’

The film is set to hit theaters on December 9, and marks Brendan’s first lead role in a movie since straight-to-DVD thriller Breakout in 2013, leading many fans to believe this is his comeback.

Earlier on Sunday Fraser looked delighted as he attended a photo call for The Whale at the festival.

He caught the eye in a grey and white pinstripe jacket and matching trousers. Brendan added a pale blue shirt underneath, a brown belt and a pair of cream shoes.

He beamed as he posed with his fellow cast members, Stranger Things’ Sadie Sink, Hong Chau and Aronofsky.

While Hong stunned in a lacy white gown with a sweetheart neckline, that showed off her ample cleavage and tiny waist.

Darren stood out from the crowd in a lilac suit, layered over the top of black and white patterned shirt. 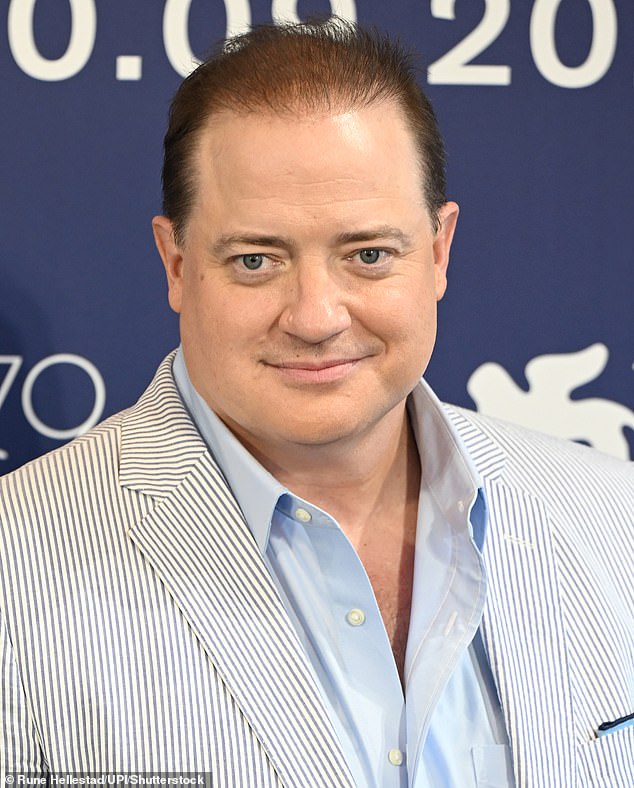 Handsome: The actor caught the eye in a grey and white pinstripe jacket and matching trousers 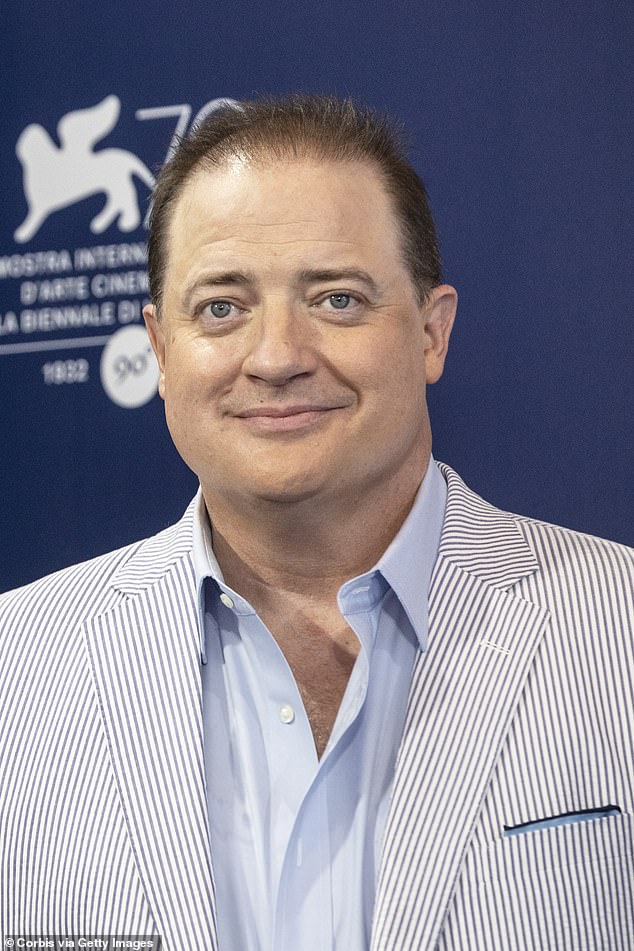 Stylish: Brendan added a pale blue shirt underneath, a brown belt and a pair of shiny cream shoes 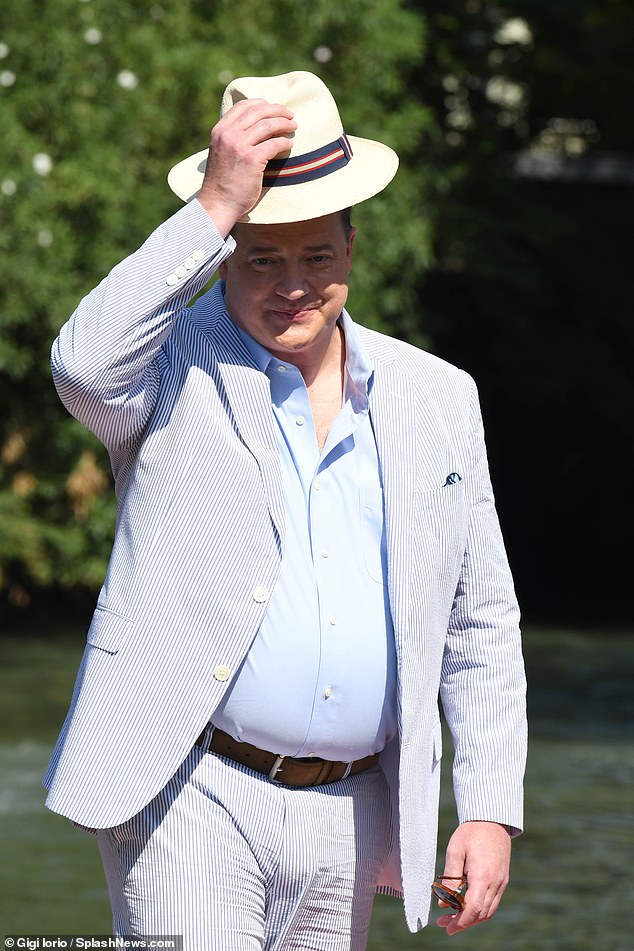 Rave reviews: The cast’s appearance comes after the film reportedly received a standing ovation at its first screening 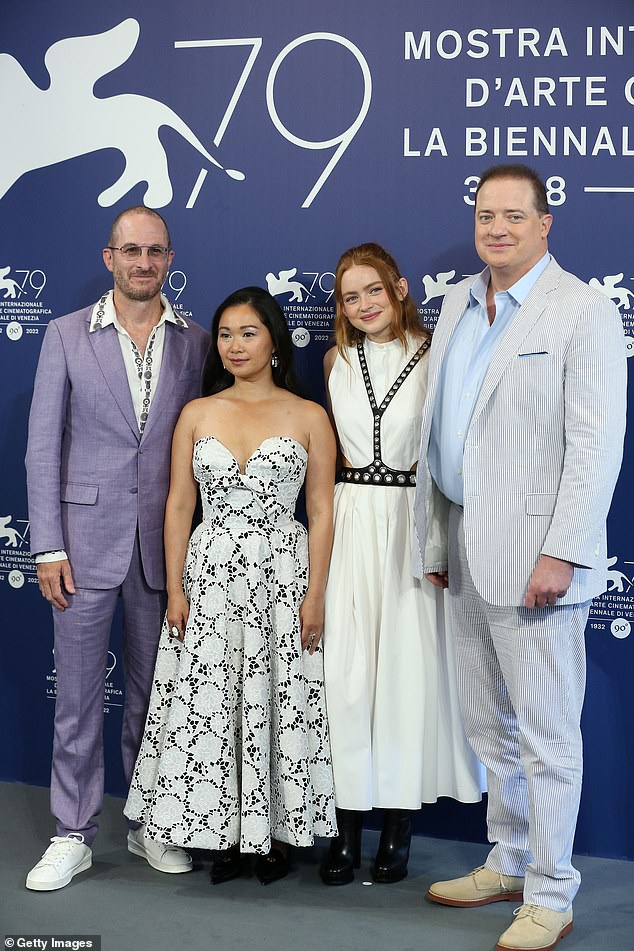 Fraser shot to stardom when he was cast in children’s favourite film franchises George of the Jungle and The Mummy.

His unbelievably chiseled physique earnt him a position as a Hollywood heartthrob as he thrashed around the sets performing stunts in high-action roles.

But Fraser revealed in a later interview the toll the stunts had taken on his body.

He told GQ in 2018 that when he filmed the third installment in The Mummy franchise, he was being taped up and was icing injuries in between takes.

Speaking from his home in Bedford, New York, he said the physical toll of his roles made him feel like a workhorse from the Orwell novel Animal Farm.

After rising to fame through the action-packed films, Fraser described his buff physique as resembling ‘a walking steak’.

However, in the same interview the actor revealed he believed he had been blacklisted from Hollywood after he claimed he had been sexually assaulted by the former president of the Hollywood Foreign Press Association, Philip Berk, in 2003.

Fraser claimed he was leaving a luncheon hosted by the HFPA at the Beverly Hills Hotel in Hollywood when Berk shook his hand.

Fraser said: ‘His left hand reaches around, grabs my a** cheek, and one of his fingers touches me in the taint. And he starts moving it around.’

He added: ‘I felt ill. I felt like a little kid. I felt like there was a ball in my throat. I thought I was going to cry.’

Fraser claimed he was able to remove Berk’s hand before running out of the hotel and going straight home. He told his then wife, Afton Smith, about the incident but never made it public.

Instead, his reps asked Berk for a written apology, which he provided, but did not admit any wrongdoing.

Speaking to GQ about the claims, Berk acknowledged he had written a letter of apology to Fraser but insisted he had not done anything wrong and dismissed Fraser’s account as ‘a total fabrication’.

After Fraser reported the claim to the HFPA he said he believed he may have been ‘blacklisted’ and was rarely invited back to the Golden Globe awards.

Fraser said the incident had caused him to ‘retreat’ as he spiraled into depression.

He described feeling ‘not worthy’ as the decade wore on, leading him to take roles he was less proud of. Meanwhile, his marriage was also falling apart.

He divorced Afton Smith in 2007 after nine years of marriage and three sons together, Griffin, Leland and Holden. As part of the settlement, he was ordered to pay $50,000 a month in spousal support.

However in 2013 he sought an amendment to the agreement asking to pay less, claiming he wasn’t earning the same enormous paycheques he had received in the 1990s during his heyday and couldn’t afford the payments.