Ben Elton on his TV career, alternative comedy scene and return to the West End 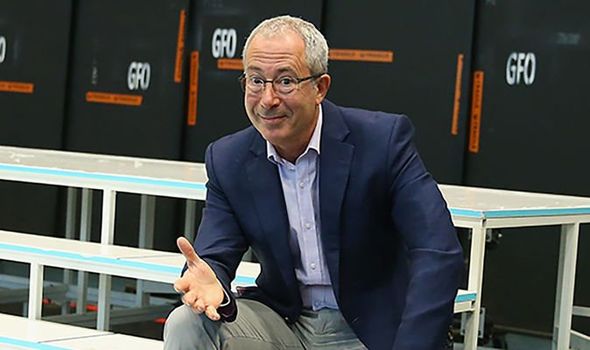 With Benny Hill back chasing scantily-clad young women around our TV screens for the first time in two decades, I mischievously ask Ben Elton if the diminutive comic’s return signals some sort of backlash against the so-called woke culture.

Wasn’t the alternative comedy scene of the eighties and nineties ‑ of which Ben and close friends Rik Mayall, Adrian Edmondson, Dawn French and Jennifer Saunders were leading lights ‑ supposed to have “cancelled” such sexist dinosaurs? Perhaps it’s not a fair question.

After all, even the label “alternative comedy” was not one its young stars ever sought, and Ben insists the point of his act was never to kick anyone out.

But after four decades, with a string of TV hits including The Young Ones, Blackadder and, more recently, Upstart Crow, as well as massive live comedy tours and Queen’s We Will Rock You musical (of which more later) to his name, he is uniquely qualified to explain the ebbs and flows of showbiz.

“I tried to get back on the telly in 2002 and was basically told, ‘You’re past it’. I don’t think I am, but you get your chance and I had a really good chance so I can’t complain and nor could Benny Hill.

“I know everyone thinks I killed him off. But believe me, television just thought it was over for him.

“Eric and Ernie were only at the top for about eight years and they were the greatest comics of all.”

There was no social revolution, insists Ben, simply a new generation of comics. And sometimes that means previous generations get less airtime.

“Whatever alternative comedy was, and, believe me, we didn’t coin the phrase, it wasn’t a political or social project,” he continues.

“Jenny and Dawn are some of my closest friends but my act was about as far apart from theirs as Bernard Manning and The Krankies.

“Benny is back because content is king and a lot of people want that nostalgia. I don’t particularly want to watch him but I’m always watching old episodes of Dad’s Army and Man About The House. I’m the generation that loves TV Gold.”

We’re talking today because Ben is about to bring his critically-acclaimed stand-up show to the Harold Pinter Theatre in London’s West End for a two-week run. Given current uncertainty over Omicron and the threat of Plan C, it’s a brave move.

“I don’t want to pretend I’m terribly altruistic but I did think, ‘No, bugger it, the first chance I get I’ll do it’, because the closure of London’s theatres broke my heart,” he says.

“The end of live entertainment in the UK for a year was a cultural catastrophe.

“Theatres never closed even in the Blitz.

The last time the London theatres went dark was under the Puritans in the middle of the 17th century on religious zealotry grounds.

“I’m really excited and proud to be, if not quite the first back, then among the first shows. It’s hard for theatres to get going so a comic like me is a useful filler.”

The shows were meant to take place 18 months ago.

After a 15-year hiatus from stand-up, Ben had performed a series of sell-out UK gigs and was due to tour New Zealand and Australia before returning to London.

So what was it like being back on stage after such a long break?

“I think swearing and cracking knob gags for a living is like riding a bike ‑ you never forget,” he laughs. “When I brought this tour back in 2019 I hadn’t done stand-up for 15 years. But it didn’t feel like a day away.

“I stepped back on stage as if I’d never walked off. So that’s not a problem as long as I’m on top of my material.

“I’m not suggesting the show’s going to revive the whole West End, but we desperately need people coming out to see shows ‑ every taxi driver, every restaurant and every theatre.”

Fans will notice some changes, of course. “The last gig I did in London, obviously I did about 20 minutes on Brexit,” he says. “I won’t be doing any of that. It’s like ancient history.

“Whereas when I was last touring Britain it was literally the thing nobody could shut up about.”

His famous sparkly suit will also be missing because he gave it to Eurythmics star Annie Lennox. “Not because she wanted to wear it,” he smiles.

“But because she was doing a big auction for Shelter. I said, ‘Only on one condition Annie, and that is that you do not tell me what you make’. I didn’t want to hear, ‘Oh, it was a bit difficult but somebody eventually gave 15 quid for it!'”

Ben, himself, is also different, admitting to a sense of uncertainty over the lightning-swift change of social attitudes in recent years. “I was much more sure of myself when I went on stage in the Eighties.

“I don’t mean as a professional ‑ I feel very relaxed on stage ‑ but sure of what I think. Society’s changing so fast, the things I don’t understand today are actually messing with the things I used to think I understood. It’s like I’m getting stupider with hindsight.”

Given his longevity, I make the mistake of asking the 62-year-old Londoner if stand-up is a young person’s game.

“There was a time when you might have thought it was an older person’s game,” insists Ben.

“Look at Les Dawson and Bernard Manning. Possibly he [Manning] was born in grumpy late middle-age. A lot of his material was deeply reprehensible but, my god, that timing. I saw him live once.

“I went backstage and there he was, sitting in his underpants, as he did, with a fag and a beer. British variety’s always been something I’ve been fascinated by.”

“All I ever want to do is express myself honestly and perform stuff I think is funny, bewildering, confusing, uplifting, outrageous, irritating… that’s what I base my comedy on. Hopefully it’s funnier than it ever was.”

He shrugs it off today but it must have been devastating when the stage version of his hit BBC comedy about William Shakespeare, Upstart Crow, starring among others David Mitchell and Gemma Whelan, was an early victim of the pandemic blackout, having just opened in the West End to rave reviews.

“The closure of Crow was very sad because it was a new show and it got off to such a glorious start,” he says.

“It was also heartbreaking closing We Will RockYou.

“It’s a young company full of great young musical theatre professionals, many of whom were enjoying their first job, and literally overnight they were all sent home.”

Thankfully the musical, written by Ben in 1991 and undeniably prescient of the effect digitised music is having today on live music, will be touring again in February to mark its 20th anniversary.

“People were still playing vinyl and CDs were in their pomp when I wrote it, but it was about a world so digitised the likes of Disney and Apple ban live music because kids making their own music is messing with their marketing strategy,” Ben explains.

“It was a good idea and still is, except a lot is coming true. The only way you can see a live gig now is in some soulless arena, not like rock’n’roll the way we used to do it when you could catch David Bowie and The Beatles at the Hammersmith Odeon.”

The show, which became one of the West End’s biggest hits for years, was deliberately not biographical.

“Brian and Roger and Deacy didn’t want that. I said to them, ‘It should be a big, fun camp, glorious over-the-top legend? King Arthur meets the Matrix.

“Let’s have a guitar buried in rock that our hero has to draw forth’.They loved it.”

However, Ben reminds me how the show was nearly strangled at birth by a deeply unfriendly critical reception.

“It’s very hard to survive a kicking when the entire media arts establishment is saying, ‘Don’t support this’.Traditionally the day after press night is the biggest box office you’ll have, particularly if you have Robert De Niro attending.

“In our case, once the reviews hit, the box office was half the previous week’s ‑ it was a disaster. But we kept fighting and slowly but surely word-of-mouth won the day.”

The critics have often responded to his work that way, I suggest.

He admits: “It’s very personal, always has been. I think I wound people up, that’s the way it goes. But I haven’t wound everyone up, that’s why I’m still on stage 40 years on.”

Famously anti-Tory, Ben remains political in his work yet these days retains a grudging respect for Margaret Thatcher.

“She was a politician of principle. Even if it made her unpopular, even if it risked losing an election, she stood by what she believed.

“Compare that to Boris Johnson, a man motivated purely by self-interest and vanity. Nobody would deny that, even his own family.

“As you know, I don’t vote Tory, but I can respect politicians of principle.”

Ben spent lockdown in Australia with his wife, bass player Sophie Gare. One of the upsides was just five weeks of lockdown ‑ and some fascinating consequences.

“There was an amateur production of We Will Rock You in a local hall in Perth and it was the highest-grossing musical anywhere in the world that week ‑ because there weren’t any others,” he laughs.

Ben was going to come back to the UK for the Olivier Awards because Upstart Crow was nominated. Then they closed the borders and he got trapped. “I thought I wasn’t ever going to see my mum again. She’s 92 and I’ve finally been allowed to see her.”

Now British audiences can look forward to seeing him, too. But only in stand-up. While many contemporaries went down the acting route, it never appealed to Ben.

“Basically I’m a writer. When I’m accused of being a cocky bugger, I think at least I’ve never put myself in my stuff. I could’ve used the Noel Coward template, ‘You can have the play but I’m going to star in it’.

“But I only go on stage because I believe the material is good. It’s not that I hate it or anything, but I don’t feel like Mick Jagger making love to the audience. Rik [Mayall] genuinely, physically loved it.

“He was a great big show off and I mean that in the nicest possible way. He’d get on that stage and he’d literally explode with exuberance. I never have that feeling ‑ I need to get this material right, it needs to be understood, and I need to get off stage.”

Ben Elton appears at the Harold Pinter Theatre, London, from December 20 to 30. For tickets, visit benelton.live.

We Will Rock You tours the UK from February 7 until September. For tickets and venues see here.