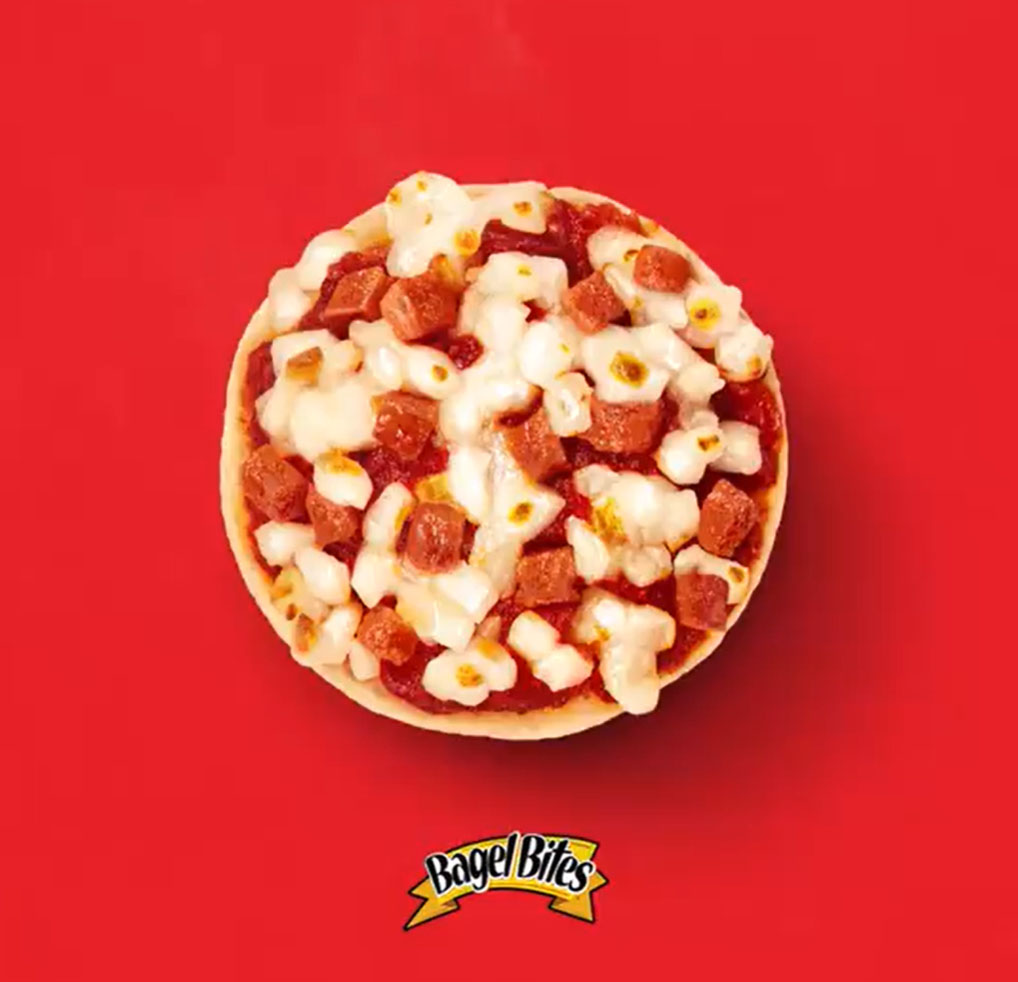 First, they came for the tuna. Now, they’re coming for the Bagel Bites. Lunches are no longer safe! A Wisconsin lawsuit is taking on Big Snacking by going after late night drunken munchies fave, Bagel Bites. The claim is that the Bites use neither real cheese nor tomato sauce in their proclaimed pizza on a mini bagel. Spearheading the effort is Kaitlyn Huber who says Nuh-uh on Kraft Heinz’s delicious frozen discs of dough. She argues the company is deceiving its customers. Kraft Heinz released a statement saying they use high quality ingredients and will defend their brand.

A new lawsuit alleges that Bagel Bites aren’t exactly what they claim to be.

Kaitlyn Huber, a Wisconsin resident, filed the suit in federal court on April 25, claiming Kraft Heinz is deceiving customers by including the “real” dairy seal on its products, according to Food & Wine.

The lawsuit argues the frozen snacks aren’t actually made with real cheese or real tomato sauce.

“The name, ‘Mini Bagels with Mozzarella Cheese and Tomato Sauce,’ is deceptive because mozzarella cheese and tomato sauce, as these terms are understood by consumers and regulations, are not present in the Product or are present in an amount less than expected,” the lawsuit reads.

Kraft Heinz has since denied the allegations and released a statement on the matter.

“Bagel Bites, the perfect bite-sized pizza snack, are made with delicious, high-quality ingredients that our fans know and love,” A Kraft Heinz spokesperson told Today. “We proudly stand by the food we make, and are focused on bringing great products to market. The lawsuit lacks any merit, and we will strongly defend our brand.”

Documents from the suit allege the “cheese blend” includes modified food starch, which could be misleading to those who expect 100% mozzarella cheese. It also notes that cornstarch and methylcellulose are added to the tomato sauce in order to “reduce the amount of tomatoes used by thirty-five percent

I am not making this up, Kaitlyn’s attorney, Spencer Sheehan, is using “we’re from Wisconsin so we know real cheese” as their basis. I don’t understand what I’m reading. Did Kaitlyn not read the nutritional information prior to purchasing? Just don’t buy them. I didn’t think the Subway tuna lawsuit would amount to anything, but I understood their case because the claimant legitimately thought the company was passing a phony product. In this case, I guess the claim is the “Real Dairy” seal. But there is dairy in the product and I assume enough to meet whatever requirements are in place to be able to put that seal there. Are Bagel Bites gross? Yes, they barely constitute as food. Has just reading their name inspired me to go out and grab a box for lunch? Absolutely! Nobody’s eating Bagel Bites for quality. Nor is anyone eating them for the taste of tomato sauce, fresh cheese or even bagel. They’re a guilty pleasure you reward yourself with. I fed these to my kids when they were little. They loved them. I made them from scratch once with all real ingredients and guess what, my kids shoved them aside and complained about not “having the real thing.”

Kaitlyn and Spencer hope to make this a class action lawsuit but only for Wisconsin, Arkansas and Ohio. I guess the rest of us don’t know what “real mozzarella cheese is” or are confused by tomatoes. Maybe New York is rustling up its own lawsuit against the bagel part of the product (although apparently it should be fronted by California *ahem*). We’ll see where this goes. Kraft Heinz can afford to play these games. Kaitlyn probably won’t be able to afford the product once the company is forced to use 100% all-natural ingredients. I’m not endorsing feeding your family or yourself this kind of food. I mean, I eat it, but you should never model yourself after my diet.

Not to mention, if you go after Bagel Bites, you jeopardize us having nice things like The Great Dog Pants Debate. Why are you trying to take our nice things, Kaitlyn?! 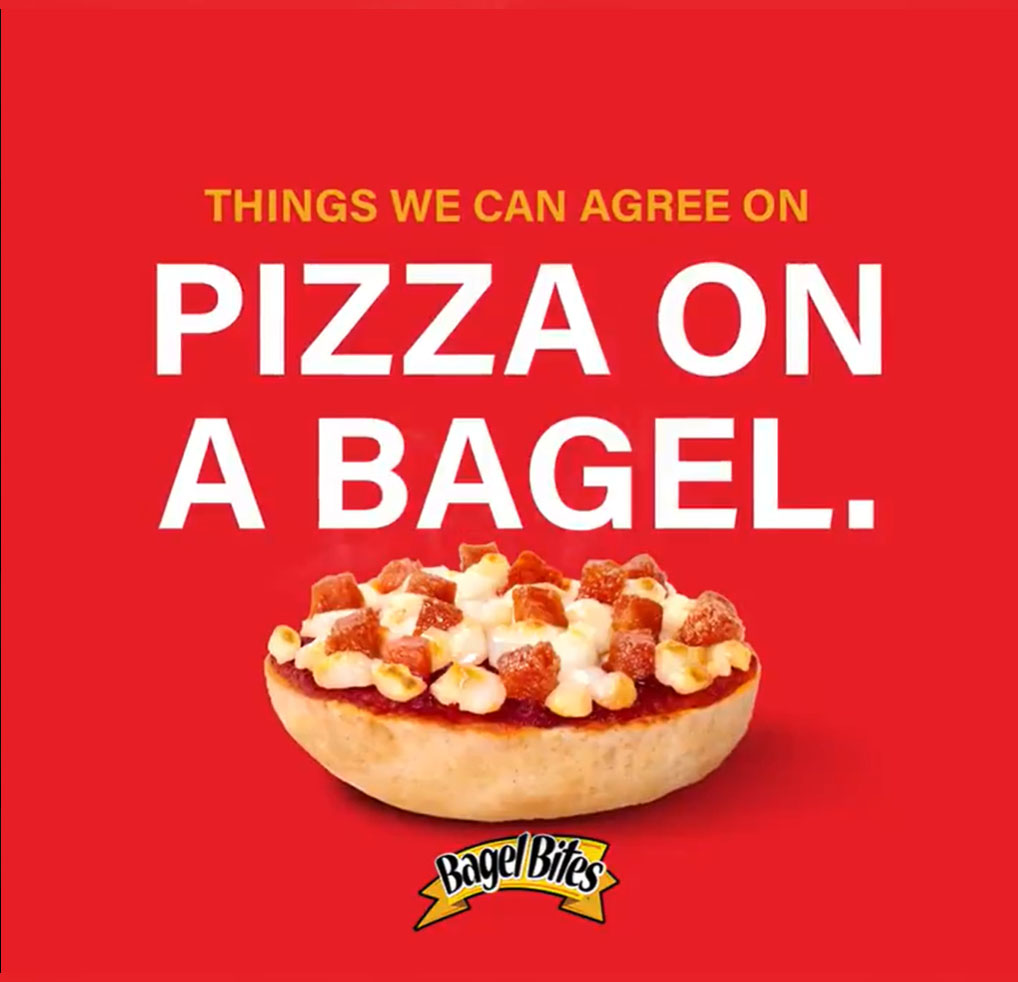