Josh Murray opened up about a scary accident he was involved in while celebrating the 4th of July.

Former ‘Bachelorette’ Winners: Where Are They Now?

“Sorry if I’ve been MIA for a couple days to those asking, figured this was easier to write here – my friends and I were hit by a drunk driver on the lake a couple days ago after the fireworks,” the Bachelorette alum, 36, explained via his Instagram Story on Tuesday, July 6. “One of my buds got hurt bad but thankfully will recover after many surgeries. Others were shaken up obviously. I’m fine physically for [the] most part.” 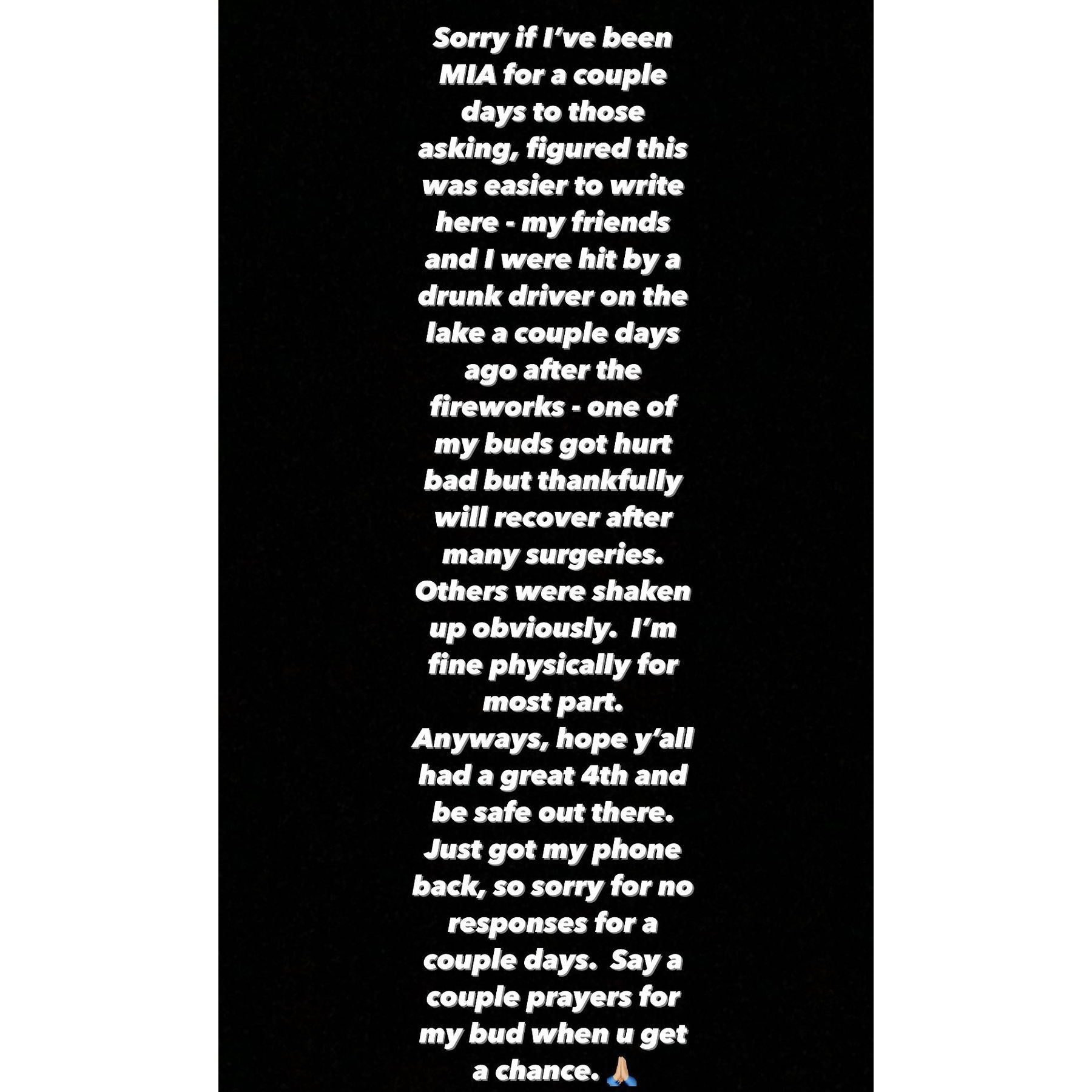 Murray reminded his Instagram followers to be careful and asked them to remember his injured friend. “Anyways, hope y’all had a great 4th and be safe out there,” he added. “Just got my phone back, so sorry for no responses for a couple days. Say a couple prayers for my bud when u get a chance.”

Bachelor Nation first met the reality star when he competed on Andi Dorfman’s season 10 of The Bachelorette in 2014, ultimately getting engaged to the attorney, 34. The pair announced their split in January 2015. She then claimed in her 2016 book, It’s Not Okay, that he was verbally abusive during their relationship, which he denied.

Murray subsequently appeared on season 3 of Bachelor in Paradise in 2016, where he proposed to Amanda Stanton. The Bachelor alum, 31, confirmed in January 2017 that they called it quits and later accused him of being controlling during their romance, which he claimed was not true. 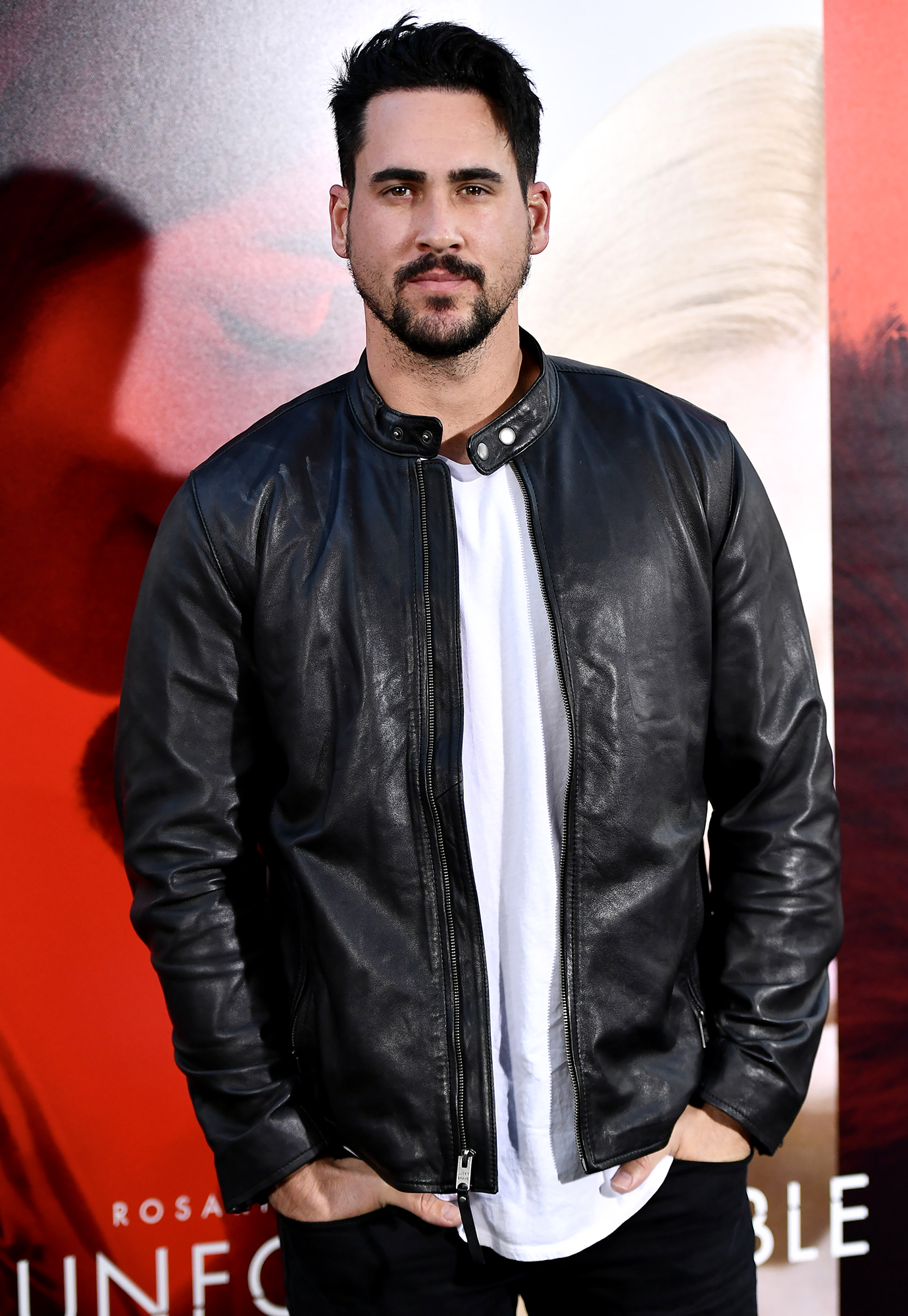 The Famously Single alum addressed his exes’ allegations in a May 2017 appearance on Steve Harvey. “That’s what’s tough to hear all the time,” he said. “In this relationship [with Stanton] I definitely take fault for continuing something and not being happy when I know I should walk away. And I feel like people can relate in any situation you’re in, something that you don’t want to be in, it ends up just not being very good.”

Despite denying Dorfman and Stanton’s claims, Murray admitted to not being without flaws. “I may have made mistakes before in being passive-aggressive with maybe a tweet or something, but I don’t like airing my dirty laundry,” he noted. “I don’t like talking bad about other people and ruining their lives, but unfortunately that’s happened with mine and that’s very frustrating.”

The TV personality also alleged that the bad blood with his former fiancées has impacted his love life. “It’s affected it tremendously. I feel hopeless,” he said. “I feel like people are already judging me based upon what others are saying, so I don’t know what to do or how to handle it. I’m in trouble, I know.”

Murray told Us in August 2017 that he “should have walked away” from his relationships with Stanton and Dorfman — who have since become friends — earlier. “It’s my fault in the long run for certain things that happened. Obviously there were connections there and there was love and stuff, but when you see certain things in relationships that you don’t like, you can’t change somebody, they are who they are.”