All of Penn Badgley’s movie and TV roles, ranked 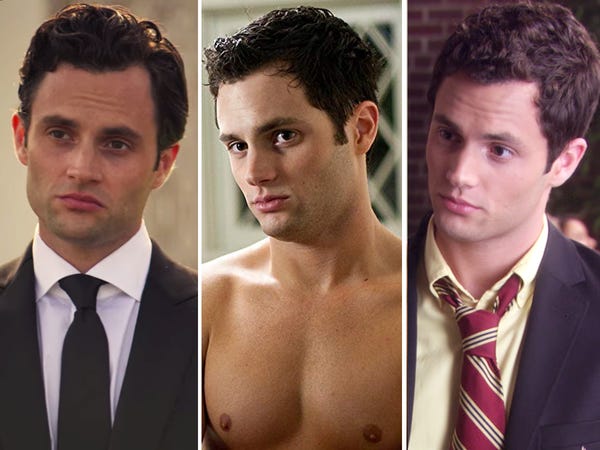 Years after his breakout part on "Gossip Girl," Penn Badgley is still making headlines for his acting.

To highlight some of his best and worst projects, Insider ranked his roles using critic reviews on Rotten Tomatoes.

Here are Penn Badgley's roles in movies and on television, ranked from worst to best.

Note: All scores were current on the date of publication and are subject to change.

Badgley played Sam on the television series "The Mountain." 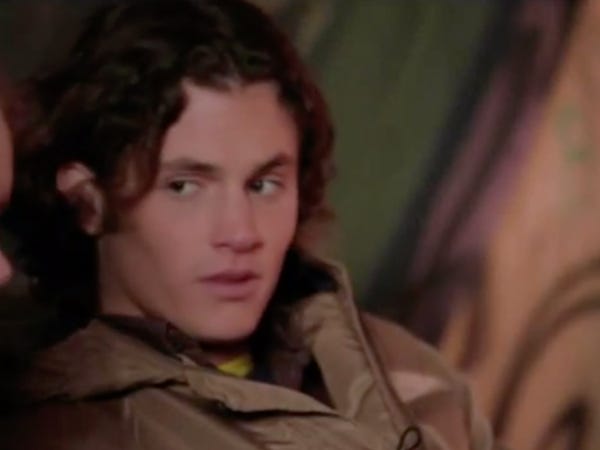 Summary: On the dramatic series "The Mountain," two brothers vie for ownership of a ski resort when their grandfather dies and leaves his legacy in their hands.

Critics felt like they were dragged along by the dramatic series' sleepy plot lines and they wished that it had dared to aim higher.

"The actors are attractive, and the locales are breathtaking," wrote Hal Boedeker for the Orlando Sentinel. "But 'The Mountain' is empty — it's 'Dynasty' without the fun."

The actor played Michael Harding in "The Stepfather" (2009). 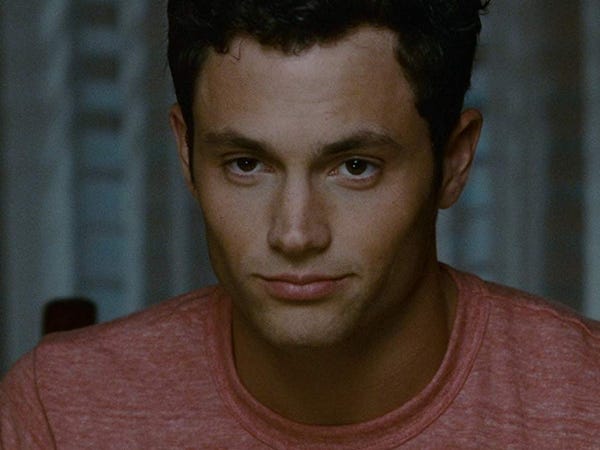 Summary: A remake of the 1987 cult horror film, "The Stepfather" centers around David Harris (Dylan Wash), a deranged man who marries into families hoping to find the perfect fit.

When his new stepson (Badgley) grows suspicious of David's motives, he risks paying the ultimate price: his life.

Critics felt like the 2009 remake of "The Stepfather" droned on, lacking the drive needed for a well-spun thriller.

"The genre has diverged into two paths: the brutally gruesome and suspenseful," wrote Perri Nemiroff for Cinema Blend. "This is going for the latter, which would have been fine if it were in fact thrilling."

On the TV show "The Bedford Diaries" he played Owen Gregory. 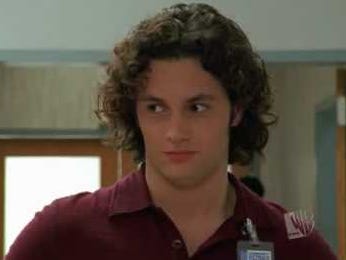 Summary: Overeager freshman Owen Gregory (Badgley) and his classmates learn about life, sex, and love in an elite human-sexuality class as an unconventional teacher asks them to reveal their innermost thoughts through video confessionals.

"The Bedford Diaries" was ripped apart by critics saying that the show lacked intelligence and a worthwhile message.

"I felt dirty even before the premiere had ended, and found myself wishing I was back with the WB college drama that got away, the much funnier, sexier, and more soulful 'Felicity,'" Samantha Bornemann wrote for PopMatters.

He played Scott Tucker in the comedy "John Tucker Must Die" (2006). 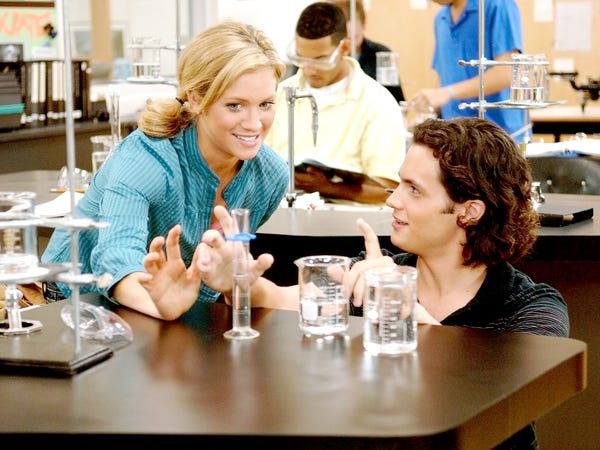 Badgley appeared in the film as John's brother, Scott Tucker.

With such a bold premise under its belt, "John Tucker Must Die" left critics disappointed with its lack of charm and wit.

"'John Tucker Must Die' is trying to be 'Mean Girls' with a more pointed purpose, but it's less fun than it sounds," Claudia Puig wrote in her review for USA Today. 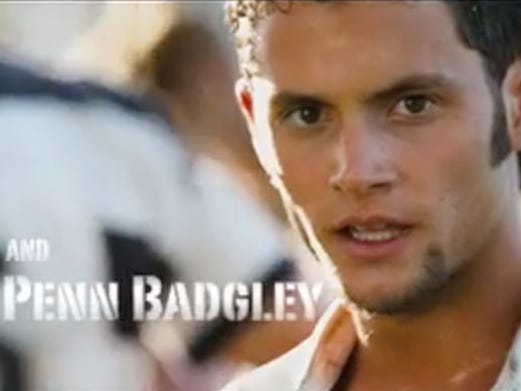 Desperate to prove himself, Rick breaks away from the influences of his former teammate Lars (Badgley) and finds inspiration from his juvenile detention center's lead Marcus Tate (Sean Astin).

Most critics rolled their eyes at the sappy drama "Forever Strong," writing that its message failed to hit home and the overall flick was difficult to take seriously.

"Created under the vague guise of 'inspirational cinema,' 'Strong' is a sloppy, soggy pile of clichés, unable to sort itself out, grow a pair of cinematic cojones, and actually try to subvert some of its rancid formula," critic Brian Orndorf wrote in his scathing review of the film. 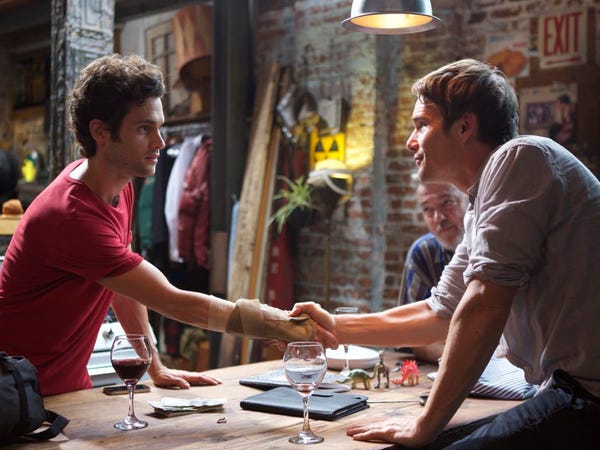 Summary: Based on Shakespeare's "Cymbeline," this action-adventure retelling of the classic play pits dirty cops against a biker gang in the throes of a turbulent drug war.

Critics lamented the talents of a great cast going to waste in a messy, scattered retelling of a revered work.

"A mash-up of social media shortcomings and Shakespearean tragedy that becomes as much a tale of cinematic ambition gone awry as anything the Bard intended," Betsy Sharkey wrote for the Los Angeles Times.

In the early 2000s, Badgley had a small role on a remake of "The Twilight Zone." 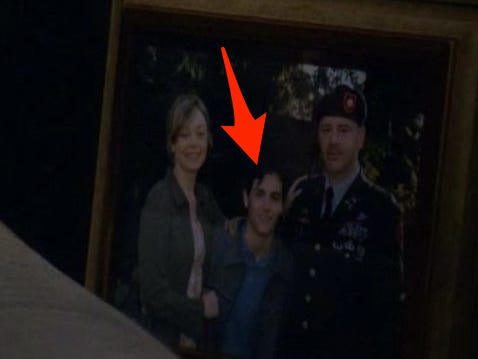 Summary: The Rod Serling-hosted science-fiction series "The Twilight Zone" originally premiered in 1959 and has received the remake treatment several times.

In 2003, Badgley appeared in the third iteration of the series on an episode titled "Homecoming." He played troubled teen Trace Malone.

In general, critical reception for the early 2000s remake of "The Twilight Zone" was poor, with the majority of critics saying that it couldn't escape the formidable shadow cast by the original series.

As Phil Gallo wrote for Variety, "Rod Serling's fabulous series goes through the remake mill and comes up with so-so results that fail to capture the psychologically disturbing nature of so many of the original episodes."

The actor has a smaller role as Young Sean in the dramatic comedy "The Fluffer" (2003). 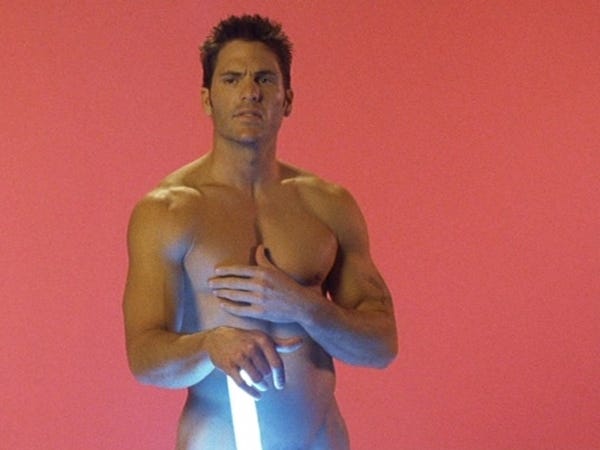 Badgley briefly appeared in the movie as a younger version of the main character.

A few critics were pleasantly surprised by the film, but the majority of reviews blamed cardboard-thin characters and limp writing for the movie's less-than-stellar reception.

"Those in search of a film about gay men disillusioned in Hollywood with a better script and more dramatic heft should rent 'Gods And Monsters' or Thom Fitzgerald's 'Beefcake,'" Susan Walker wrote in her review for the Toronto Star.

Badgley played Joel Larson on the comedy series "Do Over." 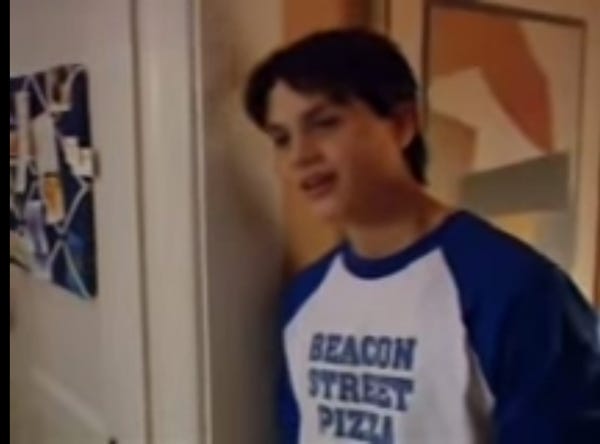 Summary: On The WB comedic television series "Do Over," 34-year-old Joel Larson is given a second chance at life when he's transported back in time to 1981 in his 14-year-old self's body (Badgley). Armed with his adult personality, Joel uses his wherewithal to do things right this time.

"Do Over" received mixed reviews from both critics and audiences who felt the show didn't seem to have a plan.

"On the credit side, Penn Badgley is not half bad as the lead, adding a bit of convincing maturity to the teen hijinks," wrote Scott Colbourne for the Globe and Mail. "The debit side is sizable, but can be boiled down to its utter lack of originality."

He appeared on the television drama "The Slap" in 2015. 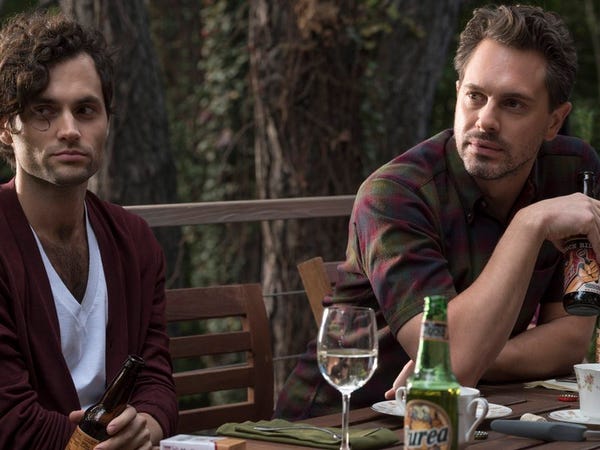 Summary: Adapted from an Australian television series of the same name, the American family drama "The Slap" centers around the tensions that brew amongst friends and family members after Harry Apostolou (Zachary Quinto) slaps a child at a family gathering.

Generally, "The Slap" was received by critics as a crossover series that marginally lived up to the potential of the original show, but it still came recommended by many.

"NBC's new version of 'The Slap' is a worthy substitute, with a strong cast and a vivid script that preserves the virtues of the original while sharpening the issues and drama for stateside viewers," Tim Conroy wrote for Media Life. 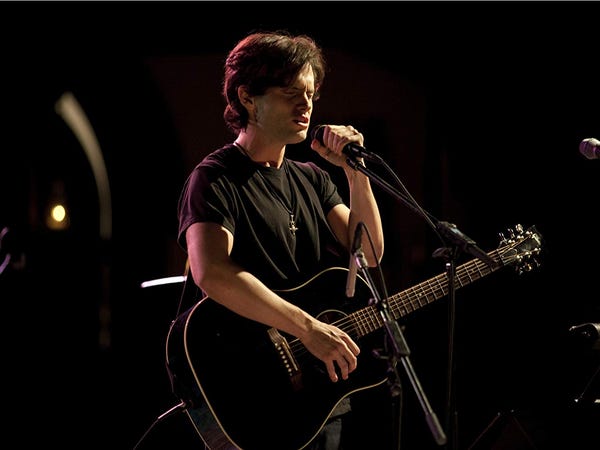 Summary: In the drama "Greetings from Tim Buckley," the life of young musician Jeff Buckley (Badgley) is explored as he strikes out in the Brooklyn music scene of 1991. Flashing back and forth between Jeff's early career and his late father's own relationship with the city, the film acts as a tribute to a pair of talented songwriters.

Many critics remarked that Badgley's portrayal of Jeff Buckley was a game-changing component to the film. 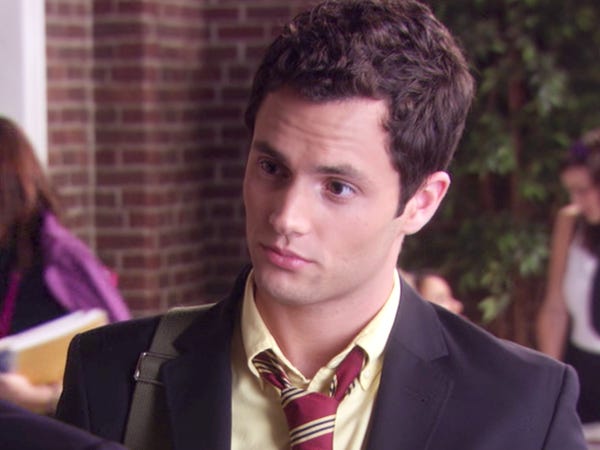 Summary: Based on a young-adult book series by Cecily von Ziegesar, the dramatic television show "Gossip Girl" depicts the high-rise lives of preparatory students living in the heart of Manhattan.

"Gossip Girl" accrued a large fan following over its many years on the air. Even critics who weren't normally won over by teen affairs shared a fond fascination for the series.

"Lord help me, I loved spending an hour hating them, their pedigrees, and their unlimited credit cards," wrote Matthew Gilbert for the Boston Globe. "It was like studying the peculiar mating rituals and shopping habits of the species Manhattanus Elitus."

The actor starred opposite Emma Stone in the romantic comedy "Easy A" (2010). 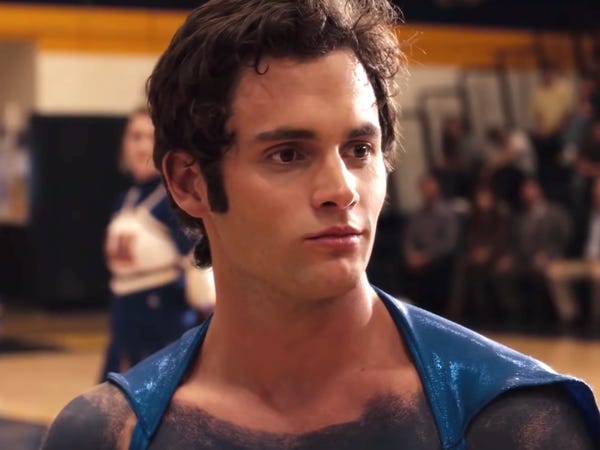 Summary: While reading "The Scarlet Letter" in high school, Olive Penderghast (Emma Stone) finds herself at the swirling center of a rumor mill of her own making. As her classmates turn against her, Oliver begins to fall for school mascot Woodchuck Todd (Badgley) when he sticks by her side.

Declared heartfelt and genuinely humorous in equal measure, "Easy A" earned high praise from an assortment of critics who said the comedy hearkened back to memorable hits of the past.

"'Easy A' belongs in the company of 'Election,' 'Heathers,' and 'Mean Girls' — all motion pictures that have outlived their theatrical lives because they have unique voices and use them to say something," wrote James Berardinelli for Reel Views.

Badgley was Seth Bregman in the thriller "Margin Call" (2011). 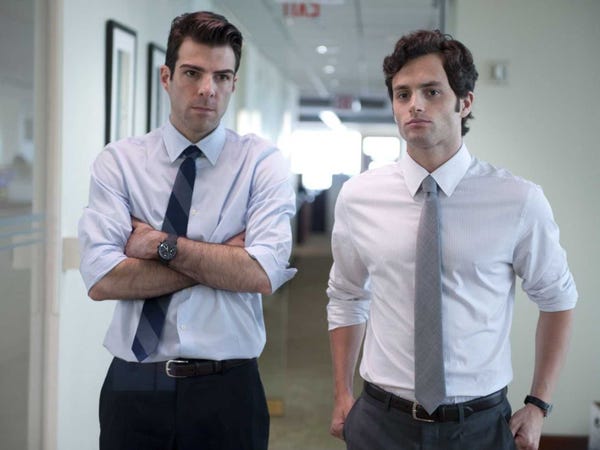 Summary: Set during the early stages of the 2008 financial crisis, the drama "Margin Call" depicts the final hours at an investment firm as key players — including Will Emerson (Paul Bettany), Peter Sullivan (Zachary Quinto), and Seth Bregman (Badgley) — brace themselves for their company's possible demise.

Overall, critics had kind words for the film, calling it a well-spun thrill ride with an electric cast at its helm.

In her review for The Oklahoman, Brandy McDonnell simply wrote, "'Margin Call' ranks among the top dramas ever made about Wall Street."

Badgley currently stars on the suspense-driven series "You." 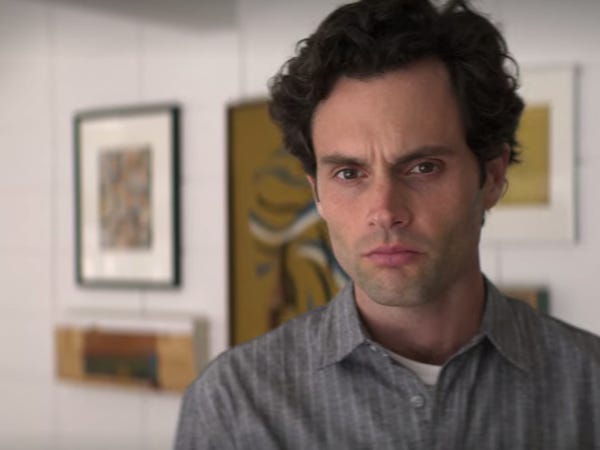 Summary: On the Lifetime-turned-Netflix dramatic thriller "You," Badgley stars as bookshop manager Joe Goldberg, who falls in love with an aspiring novelist named Guinevere Beck (Elizabeth Lail). As Joe's affections warp from love into obsession, he realizes that he'll stop at nothing to keep her to himself.

Critics overwhelmingly awarded "You" with positive praise, saying that they were hooked by the show's premise and won over by the talented cast.

"What's unnerving here is that Joe is so charming (and Badgley such a winning actor) that we become, if unwillingly, complicit in his dangerous fantasies," wrote critic John Boland in his review for the Irish Independent.

Can hairdressers open during the second lockdown?
Recent Posts